during the pandemic, i was looking for silver linings wherever i could find them. one of the brightest spots was becoming an aunt to this gorgeous, gray-eyed guy, enzo.

before diving in, let me just say that with me, he will likely be able to get away with murder because when i look at him, i quite literally melt.

i arrived on a monday afternoon after a two week quarantine. i made sure to shower before getting on the road, not spray on any perfume (as not to agitate his sensitive skin) and made no stops en route. as soon as i arrived, i was overwhelmed. who do i hug first? will the baby be open to snuggle time with his auntie? will he have some recognition when it comes to my voice since his mom and i facetimed five days per week during her second and third trimester plus a few times a week since he’s exited the womb? enzo’s dad and i quickly unpacked things i brought that needed refrigeration and he took my suitcase to the guest bedroom. i washed my hands, rolled up my sleeves and was ready for the baby. as soon as i held him, i was in love.

is there anything better than the smell of a baby?! this is one of our first shots together captured by his amazing mama, anj. she has been writing some amazing pieces about the delivery process and mom life in general that you can find here.

anyway, with anj and i both being planners, we talked about my visit beforehand – everything from things i could cook/prepare while visiting, how to access laguna beach from season one (because we wanted to binge it together) and tasks/projects that she wanted to accomplish that would be easier to do if there were a second/third set of hands present. while aaron is definitely an involved husband/dad, he also works anywhere from 10-14 hours a day with sometimes only one day off per week. that being said, it is frequently just anj and enzo, especially with visitors being next to nonexistent due the pandemic. i was happy (and eager) to come in and help out however i could, spend time with a family i love and snuggle up with my nephew. 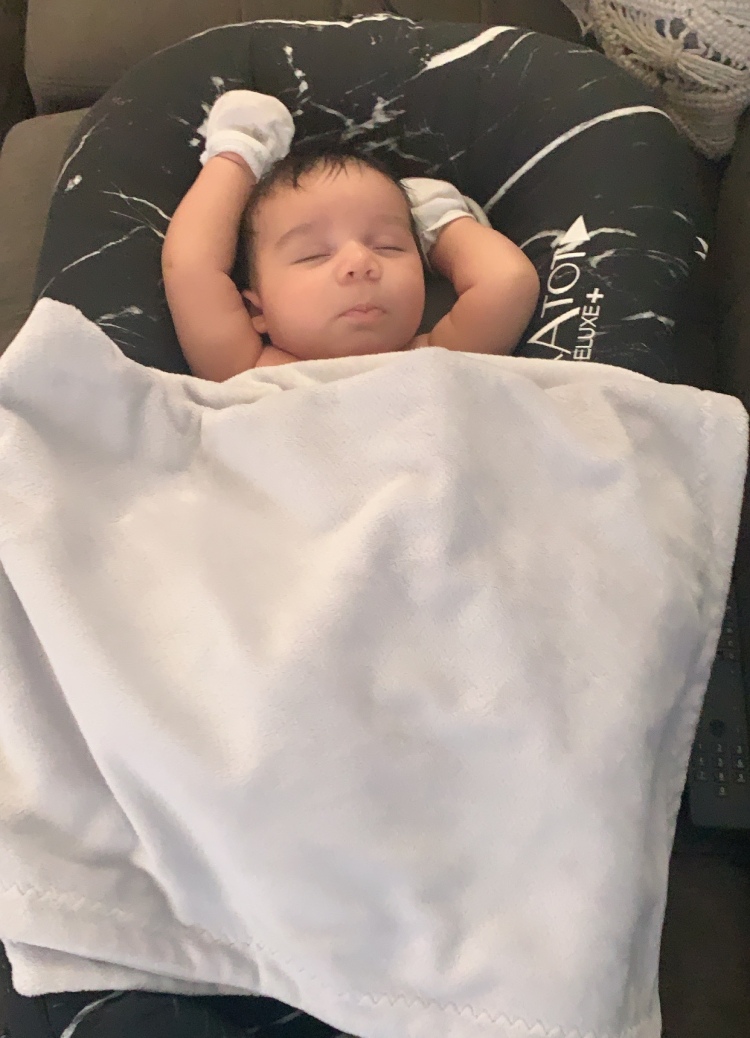 *could he be more animated?!

while his temperament is definitely one that is desirable, during the time of my visit, he was at a stage where he wanted to be held nonstop. anj tried a variety of different carriers and he hated them all. that meant whenever awake, if you didn’t want him screaming bloody murder, he needed to be held. what did that look like when anj was alone five or six days a week? i had to ask because even with both of us being home for the majority of each day, it was sheer insanity. and not insane like unable to function but insane like i was in complete awe of what a badass my best friend was and is.

there is one morning that is worth highlighting from start to finish because if not there to be part of it, i don’t think i would’ve fully understood the amount of adjusting and readjusting moms are out here doing on a daily basis with their little ones. at just after 7am on a thursday morning, her husband received a text asking him to work a closing shift instead of an opening shift. this meant the earliest he’d get home was now 9:30pm instead of 6:30pm. our plans to relax her hair would have to shift since it would be quite late when aaron would be back home. here’s the thing about relaxing hair – once we start applying the chemicals, we are racing against the clock and neither of us will be able to stop the process or tend to the baby at all. a third person has to be present. with anj not being  able to go get her hair done due to not leaving the house for anything that isn’t absolutely essential, she asked me ahead of time if i’d be willing to do it for her. i’ve relaxed my own hair a couple of times when unable to schedule an appointment and felt comfortable being her hairdresser for the day. we figured we should get started while aaron was still home before he needed to get ready for work. downstairs anj and i went.

i gloved up (to prevent chemicals from getting on my hands) and coated anj’s scalp with coconut oil. she figured she could use this time to get some work finished on her macbook for the chiropractic office she manages. we were still still on step one when aaron came downstairs with enzo. we kept working – me on her hair and anj on her job. afterwards, she went upstairs to shower and rinse out the relaxer. anj was probably upstairs for just under an hour (which i thought nothing of). it takes me awhile to rinse out my relaxer – it is imperative that all of it is removed for it can take a few attempts. when anj came downstairs, she was glowing. i was then informed that her 30 minute shower and 15 minutes afterwards (devoted to skincare) was a true treat. no shower since enzo’s birth had been longer than five minutes. i was shook.

aaron went to work and we continued with the rest of our day. i tidied up the kitchen and worked on some things for my blog while she took enzo for a walk. when they returned, i asked if there were things i could help her with. since enzo was asleep, she took that time to tackle some additional work for the office. once he was awake and fed, her only ask was that i hold him. that made it possible for her to zip around and file paperwork, clear the dining table of all things baby related, finish addressing 2020 xmas cards and drink some tea. we placed an order for lunch and by the time it arrived, enzo was awake. my favorite waitress at my go to brunch spot always says that being mom means never eating your food while it is still hot. i have never seen that be more true than on my visit to see anj, aaron and enzo. anj often ate meals a full hour after they arrived. sometimes, she would eat standing up (maybe so enzo wouldn’t see her).

there was no time during the day that anj rested or slept while enzo slept because there was literally ALWAYS something to do at the house. from endless laundry (covid cleansing aaron’s uniforms, baby clothes to accommodate enzo’s constant growing, the regular loads) to preparing for aaron’s birthday and christmas (the 19th and the 25th) to squeezing in photo calls with mama oz (enzo’s amazing grandmother) to responding to emails for work to assembling things for enzo, there was next to no idle time.

if enzo had a restless night of sleep, so did anj. one day, he had slept maybe two hours total…all night…broken up. that meant anj slept less than one hour total. and guess what? the work did not stop. even with me talking to anj on facetime more days a week than not, it wasn’t until i was there in the flesh that i saw that no matter how precious, healthy or well behaved enzo was, parenting, and more specifically, motherhood, was absolutely grueling. no one talks about how even in a two parent household, there are immeasurable sacrifices and the mother often just says goodbye to any sense of scheduling normalcy for the duration of the baby’s infancy. this had my wheels turning rapidly on my drive back to la at the end of the week.

well before i ever had a desire to be married, i always wanted kids. even now, while i would like to be married, i don’t view partnership as a nonnegotiable the way i view motherhood. i know i am meant to be a mom. i’ve thought about all of the ways this could happen. one of the ways could be as a single woman. if i had a child in my own, i am now so much more aware of the kind of help i would need from my support system of family and friends for at least the first six months. it involves a color coded google calendar and someone regularly occupying my guest bedroom so i, too, can take a shower longer than five minutes, keep my house relatively together and continue seeing clients after the first 6-8 weeks home.

but here’s what i can tell you – moments like the one below will make it all worth it.