while i have been in spain, i have had several conversations about the importance of surrounding myself with good people.  and not people just people who treat others well but people who truly make me think and reflect on the life i am living.  i do not want to be the smartest person in the room because i want to be able to constantly continue learning.  i think of myself as a forever student.

i may have met jude while i was a senior during her freshman year at santa clara university but now, the age gap seems to be insignificant.  jude founded an amazing company, in her shoes, that encourages people, especially young women, to lead more courageous lives.  i have seen jude grow leaps and bounds year after year and am constantly in awe of how inspiring she is to so many people around her (of all ages), especially me.

last week, she posted this captivating shot (because she is a bombshell in addition to being absolutely brilliant) with an even more captivating quote.  the full quote was:

“get honest with people about who you are, what you want, and how you expect to be treated.  don’t be afraid of the solitude that raising your standards can bring.  standards only scare off people not meant for you.

become unshakable in the belief that you are worthy of a big life.”

here is the part i could not shake: 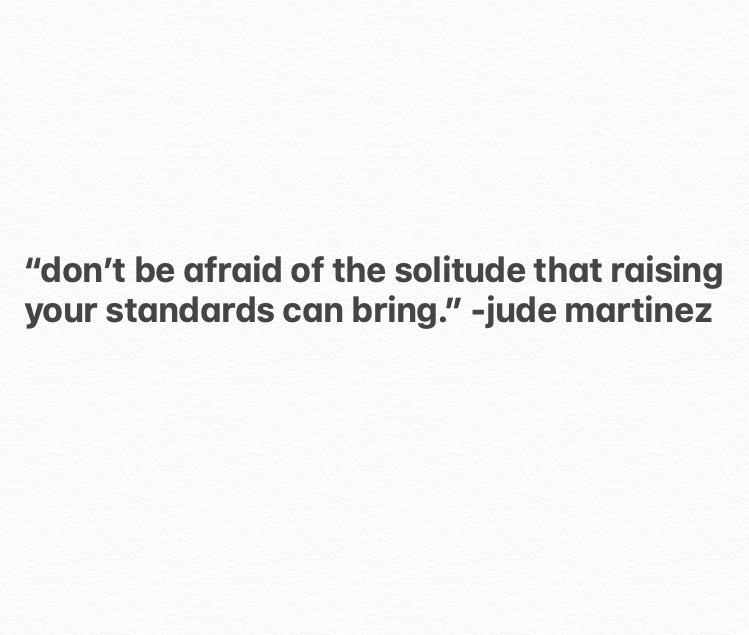 “don’t be afraid of the solitude that raising your standards can bring.”

i thought of things that i allowed in my teens, early 20s, and even mid 20s that i no longer tolerate.  when i asked myself why i let certain situations play out the way they did or why i allowed people to mistreat or take advantage of me, it was hard to pinpoint why.  in reading this quote from jude, it became clear that it was about more than simply wanting to be loyal, i think it was a fear around who would be left if i did hold people to a higher standard.  what is crazy is i really just wanted to hold them to the same standards i held myself to.  i think it was around my 27th birthday that i started doing more of that.  and with every single day that passes, it gets easier and easier to stay true to those standards.

i no longer feel guilt about expecting more because with what i am bringing to the table, i know i deserve more.

i no longer am afraid of the solitude that comes along with raising my standards because in raising them, i have been rewarded with the most fierce inner circle in existence.

there is something so freeing about that same solitude i used to fear.

are you afraid to raise your standards?  is it because of solitude or because of something else entirely?  i would love to hear about it.